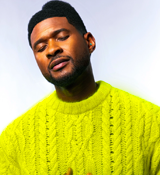 Usher is simply a living legend. Starting his iconic career in the 90's, Usher has sustained the test of time continuously showing the world why he is the King of R&B. On our site you will find a slew of information, photos, videos, and unreleased items collected over the length of his career. This site is made for and by fans. We hope that you enjoy our hard work.

Warning: Use of undefined constant windowtarget - assumed 'windowtarget' (this will throw an Error in a future version of PHP) in /home2/usherweb/public_html/wp-content/themes/sin21-wp27/header.php on line 100

Published on In
Interview

Usher is back in Las Vegas with “My Way: The Las Vegas Residency” at the Dolby Live at Park MGM, and he’s talking to “Extra” about this new show following a successful run with his first at the Colosseum at Caesars Palace.

Usher also opened up about his good friend Justin Bieber, with whom he recently vacationed in Idaho after Justin’s his Ramsay Hunt syndrome diagnosis.

“As an artist, I think we are all going to experience some things that people may not necessarily understand,” Usher said, referencing a performer’s life being “a life that comes with a great deal of pressure.“

He went on to say, “I think [Justin] has obviously taken the world on a journey. I am happy that I was at the beginning of and I am still a part of to this day, as a friend.”

Revealing how Bieber is doing, Usher said, “He is doing great. Seeing him on vacation, we managed to hang out with each other, and I think that whatever he may be experiencing right now it’s actually really great to see that he has the support from his fans and his family.”

Usher is giving the fans “My Way,” but the show is really their way. He said, “It’s all about giving the ladies what they want to see, you know? It’s about giving Vegas something they may not have experienced before… It’s a bit theatrical… So many things throughout my career — Broadway, acting, skating, hit records, dancing — I try to put all of those things into my show. I’ve played arenas and stadiums, but to be here at Dolby Live theater and give them this intimate view of my music and also to share with them the things that I am passionate about and the places that I’ve gone… whether it’s the heat of the strip club or the intimacy of the moments that’s nice and slow… It’s all of that into one.”

No comments to show.

We are not Usher. UsherDaily.NET is an unofficial site. We are just a community of Usher fans, in order to promote, support, and help Usher’s career. If you find any photos/videos on this site that belong to you, and you'd like to have them removed, please contact us first before taking legal action. We are a free site, paying out of pocket for everything, and trying to support the artist.